Indirect detection preserves the affinity of the primary antibody by eliminating the possibility of conjugation interfering with its antigen-binding sites (paratopes), preventing compromised detection of the target molecule antigens.

Directly conjugated primary antibodies are often of limited availability, with a poor range of species or conjugate offered commercially. Greater choice is possible using indirect detection. Secondary antibodies are readily available conjugated to a wide range of reporter molecules, from enzymes, fluorescent dyes and proteins, and to amplification molecules such as biotin.

Indirect detection also enables one secondary antibody to be used with a variety of primary antibodies, which may present better value than purchasing multiple direct conjugates.

The choice of host species often comes down to either personal preference or previous experimental validation. There appears to be little difference in quality between secondary antibodies raised in different host species, merely that some species are more appropriate for large-scale production.

It is important to pick a secondary antibody with the correct specificity. Although whole IgG (H+L) is suitable for most immunoassays, other specialist specificities allow more complicated experiments to be designed to remove potential interference from unrequired detection.

Anti-IgG (H+L) antibodies have broader epitope recognition than anti-fragment specific antibodies. They are also suggested for all general immunodetection procedures. 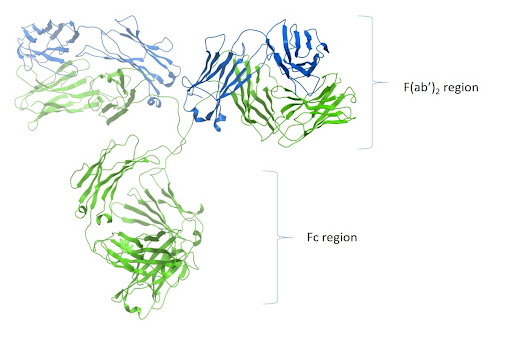 Figure 1: Ribbon diagram of IgG and F(ab’)2 and Fc region

Pan-specific antibodies are also available, which can be used to detect two or more isotypes. Depending on your application, this may be useful. Choose a secondary antibody that is specific to the isotype of the primary antibody.

IgG-specific antibodies will detect all gamma isotype immunoglobulins due to the similarity of their homologous Fcγ domains. Depending on the mouse strain used to generate the primary antibody, the subclass of the immunoglobulin could be 1 of 5. It may be the case that you have two mouse antibodies of different subclasses targeting two proteins in the same experiment. To differentiate between the two primary antibodies, you would require subclass-specific antibodies.

These antibodies react with the light chains shared by IgG and the other immunoglobulins. They were developed to facilitate the detection of proteins around 50 kDa on western blots after immunoprecipitation (IP) and do not react with IgG heavy chains.

These antibodies react with the F(ab’)2 / Fab portion of IgG. They have been tested by ELISA and/or adsorbed against Fc fragments. They are not specific for IgG since they react with light chains, and they therefore also react with other immunoglobulin classes (IgA, IgM, IgD and IgE) and subclasses sharing the same light chains.

They are predominantly used to detect scFvs (Single-chain variable fragment antibodies). IgG F(ab’)2 fragment specific antibodies may be used in western blotting where enhanced sensitivity to the F(ab’)2 antibody is required and may offer advantages over whole molecule specificity

The sensitivity of the secondary antibodies depends on the specificity of the primary antibody and the abundance of the protein of interest. By increasing the concentration of the antibodies, the background signal may increase beyond that of the analyte’s signal.

The correct concentration must be determined to achieve a high signal-to-noise ratio so that background signal does not interfere with detection of the target protein and result interpretation.

Poorly expressed proteins or primary antibodies with weak affinity may benefit from sample concentration or immunoprecipitation rather than extended incubations or more concentrated antibody solutions.

HRP conjugates can offer excellent sensitivity when paired with high-quality chemiluminescent substrates such as ECL, enabling reported antibody dilutions between 1:20,000 and 1:100,000. Optimum working dilution should be determined by titration.

Stepwise dilution of each primary antibody and secondary antibody can be performed easily using a dot blot grid whereby concentrations of antigen and detection reagents can be evaluated and limits of detection determined.

Membranes may be stripped to remove the primary and secondary antibody complex and reprobed with a second pair of antibodies to allow the detection of a second target protein.

The success of stripping can be highly variable and must be carefully performed to prevent either being too harsh and damaging the antigen. Alternatively, conditions too mild to strip the antibody complex from the membrane may lead to continued detection.

The results of a reprobed blot should only be used for confirmation, not for quantitation. Choosing a second primary antibody raised in a different host to the initial antibody can help improve the specificity of the reprobing. Stripping and reprobing membranes for additional targets are typically applied in chemiluminescent detection, as fluorescent conjugates offer a more reliable method for detecting multiple targets. See Section 8 for more information about multiplex detection.

Whole IgG antibodies are generally the only format required for western blotting, consisting of both heavy and light chains making up bivalent Fab arms and Fc domain.

F(ab’)2 secondary antibodies have been enzymatically processed to remove the Fc portion. This may be beneficial in some experiential conditions, such as to avoid binding to Fc receptors on live cells or to Protein A or Protein G. However, typically, these considerations offer no advantage to western blotting over whole IgG antibodies.

Fab fragments are generated by digestion of whole IgG antibodies with papain to remove the entire Fc region and the disulfide bond between the Fab fragments. These antibody fragments can be used to block immunoglobulis derived from the sample material.

Fab fragments specific for the Fc domain can be used in western blotting after immunoprecipitation in combination with Fc-specific antibodies to block the signal from degraded heavy chains. See the above section for more details.

Found Part 6 of our Western blotting guide useful? Get an update when part 7 is available here