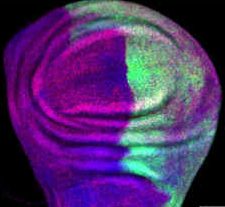 Find out about the research of the 2016 FabuLight™ competition winner, Jana Mach from the Laboratory of Growth Control and Cancer Research, and how she uses Jackson ImmunoResearch Secondary antibodies.

“In our lab, we are focusing on the Hippo signaling pathway and its role in animal organ growth control and oncogenesis.

In my PhD project, I am working on identifying and characterizing new components of the Hippo pathway using Drosophila as my animal model. In my typical experiment, I use genetic tricks to ablate a gene of interest in one half the wing imaginal disc (a larval organ comprised of an epithelial cell monolayer that will give rise to the adult fly wing during the metamorphosis). Next, I dissect my samples and do immunohistochemistry on them to see the effect of the gene ablation on the Hippo pathway activity, tissue morphology, and other aspects of the tissue development, such as cell proliferation or cell death.

Acquiring nice confocal images of my samples is my favorite part of the job.
My research largely depends on good antibody stainings. A significant part of the secondary antibodies we use in our lab come from Jackson ImmunoResearch. I use these reagents on weekly basis and I can hardly imagine my research without them.” 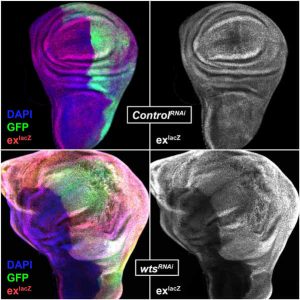 Figure: Control RNAi (Top) and warts (wts) RNAi (bottom) coexpressed with GFP in the Drosophila wing imaginal disc. Expanded (ex) lacZ is the activity readout for the Hippo pathway effector Yorkie. Depletion of the Warts protein in the GFP positive region results in tissue overgrowth and induction of the Yorkie activity reporter ex-lacZ. Cy3 anti-mouse from Jackson ImmunoResearch was used to stain for beta-galactosidase to visualize ex-lacZ.