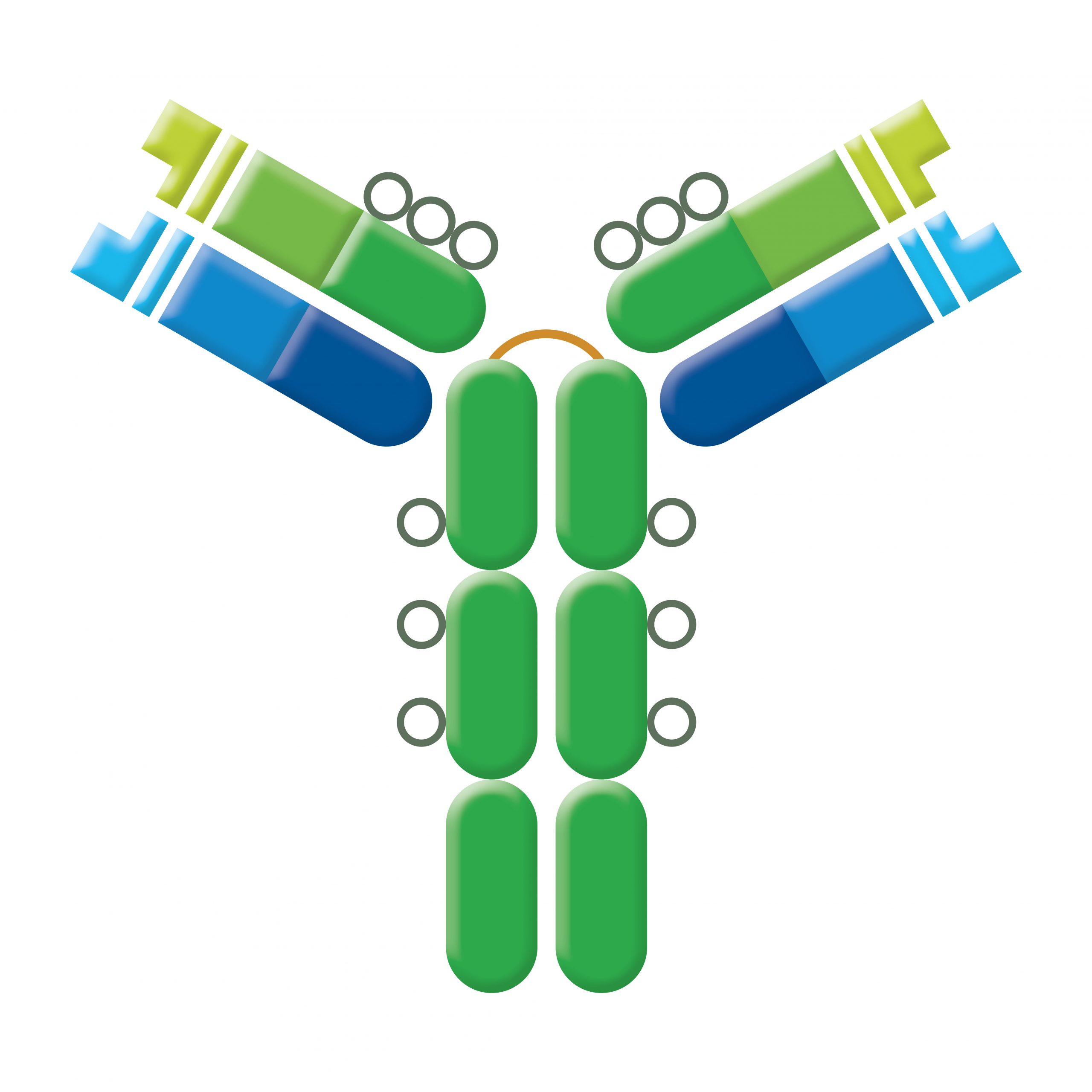 There are five classes of immunoglobulins, IgG, IgM, IgA, IgD, and IgE. These are distinguished by the type of heavy chain found in the molecule. IgG molecules have heavy chains known as gamma-chains (γ); IgMs have mu-chains (μ); IgAs have alpha-chains (α); IgEs have epsilon-chains (ε), and IgDs have delta-chains (δ).

Differences in heavy chain polypeptide sequence allow these immunoglobulins to function in different types of immune responses and at particular stages of the immune response. The polypeptide protein sequences responsible for these differences are found primarily in the Fc fragment.

Serum IgA is monomeric, whereas dimeric secretory IgA is found in all mucosal secretions. Dimer formation is facilitated by Fc domain “tails” and an interconnecting peptide (J chain), which facilitates the transport of IgA across the epithelial mucosa (transcytosis). Dimeric IgA binds with polymeric immunoglobulin receptor (pIgR) present on the epithelial cells. The complex is then internalized and transported via vesicles through the cytoplasm of the cell. Proteolytic cleavage of the pIgR releases the antibody to the epithelial mucosa. The extracellular domain of the pIgR is retained by the secreted dimeric IgA as the secretory component. IgA acts as a neutralizing antibody and is important in mucosal immunity, preventing invading pathogens from attaching and penetrating epithelial surfaces. IgA has two subclasses in humans.

IgD exists as a monomer and is found in low levels in serum. The role of IgD is uncertain, although its expression may correlate with the elimination of autoreactive B cells. IgD is co-expressed with IgM on B cell surfaces where it functions as antigen-specific BCR: the presence of IgD serves as a marker for the differentiation of B cells into their mature form. IgD does not bind complement. IgD may bind to basophils and mast cells, activating these cells to produce antimicrobial factors that function in the respiratory immune defense.

IgE is monomeric with an extra CH domain (CH4). IgE serum levels are low in healthy individuals: high IgE levels may indicate inflammatory disease, parasite burden, or allergy. When IgE binds to Fc receptors on basophils and mast cells, the activated cells release their granules; histamine, heparin, leukotrienes, and other compounds eliciting immediate hypersensitivity (allergic) reactions. IgE does not fix complement nor is it agglutinating, but it recruits eosinophils to clear parasitic infection.

The Human IgG isotype consists of four subclasses named in order of their decreasing presence in adult human serum. Although the subtypes share >90% sequence homology there is variation between them at the hinge and CH2 regions, as well as differences in the glycoforms present on the Fc. These subtle structural differences change the conformational flexibility and binding affinities of the subclasses, significantly impacting their biological function. The subclasses are named independently in each species: humans have four subclasses, horses seven, rabbits just one, and mice five. JIR provides secondary antibodies that are specific for the five mouse subclasses.

IgG is important in the humoral immune response, providing protection from pathogens by neutralization, opsonization, and the complement pathway. IgG neutralizes viruses and bacteria by binding to pathogen surface proteins, preventing the pathogen from entering host cells and replicating. In opsonization, IgG binds pathogens to phagocytic cells (macrophages and neutrophils) via their Fc receptors (FcγR), mediating phagocytosis and pathogen destruction.

A final mode of protection comes via the complement pathway, in which IgG-coated pathogen is recognized by C1q protein. Binding of C1q to multiple Ig on the pathogen induces its conformational change which activates the classical complement cascade and subsequent clearance of the immunoglobulin-pathogen complex by phagocytosis and lysis.

IgM exists in 2 forms. Monomeric IgM is found on B cells, functioning as a B cell receptor (BCR). Pentamers (hexamers have also been found) that consist of 5 identical antibody units are found in circulation. These pentamers confer a high overall avidity from 10 binding sites, making IgM a potent complement activating antibody. IgM has an extra domain on the mu chain (CH4) and contains a J chain which is essential for the active transport of IgM through epithelial cells (see IgA). IgM does not cross the placenta, but is the first Ig to be made by the fetus and the first Ig to be made after immunization or exposure to antigen. Elevated levels of IgM may indicate recent infection or exposure to antigen.

Immunoglobulin type is also classified by the light chains present. The light chains may be either kappa (κ), or one of 4 lambda (λ) subtypes, and either light chain can be associated with any of the heavy chains. The ratio between κ and λ light chains varies between species, e.g. humans’ ratio of κ to λ light chains is about 60:40, whereas the ratio in mice is 90:10.