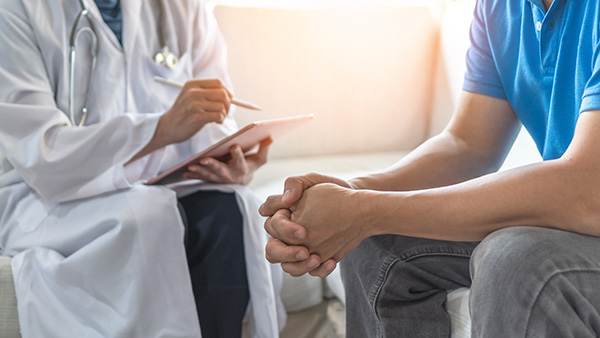 Single chain variable fragments (scFvs) are commonly used in CAR-T (chimeric antigen receptor T-Cell) cell therapy applications.  scFvs are generated from heavy chain/light chain fusions (Figure 1) from sequences of either Mouse or Human immunoglobulins which are then expressed on the surface of a T-cell. The scFv acts as the antigen receptor and targets the T-cell to the cell type of interest, based on its affinity to a target. One of their current uses is as therapeutic agents for the treatment of cancer. scFvs in CAR-T therapies generally target proteins that are highly expressed on the surface of certain cancer cell types or are unique to the cell type targeted (e.g. CD19 in B-cell lymphomas and/or myelomas). Initial CAR-T constructs expressed single scFv domains, but later generations have seen the addition of effector domains and/or multiple scFvs with alternate specificities to optimize how they target the T-cell or influence its response/activation.

During CAR T-cell development, characterization of scFv expression is necessary. This is often performed by flow cytometry using fluorescently conjugated antibodies specific to the Fab region used to engineer the fusion. Detailed characterization of treated tissue or cell samples is required for validation of the therapeutic and is performed using immunohistochemistry (IHC) or ImmunoFluorescence (IF).

To ensure the successful detection of scFvs, it is important to use the correct antibodies which recognize the species and sequence used to generate them. Here we detail some key considerations for the detection of scFvs. 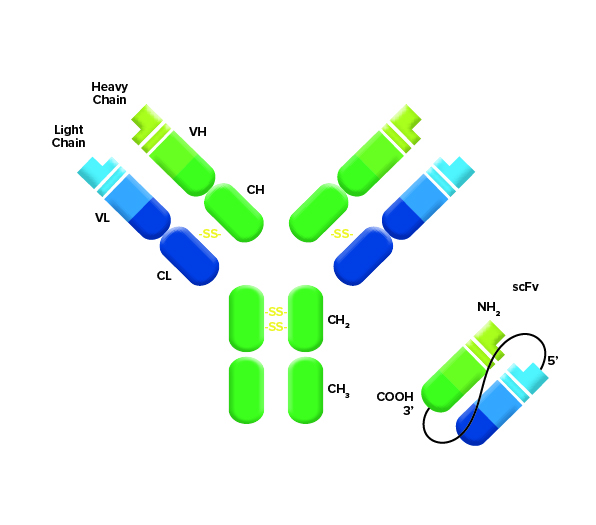 Do I need to target the Fab?

Target the VH and VL chains by choosing an F(ab’)2 specific antibody to ensure the highest activity. While a secondary antibody conjugate generated against a whole molecule antibody may detect an scFv, one that has been made with greater specificity to the Fv itself will have greater activity. Fab-specific antibodies recognize only the Fab domain of an antibody and titers are not diluted by Fc or hinge region-specific paratopes and are an ideal choice for scFv recognition assays.

What Species is my scFv derived from?

scFVs are commonly derived from Human or Mouse-hybridoma monoclonal antibody sequences. Alternatively, other monoclonal antibody hosts may be used or scFvs having optimal binding parameters may be generated directly from screening/selection systems such as phage display. Knowing the composition of your scFv and its source can help you choose the optimal detection method. For example, Mouse-derived scFvs require Anti-Mouse reagents while Human or Humanized scFvs require Anti-Human reagents.

Species of the sample material?

Are there other antibodies in the assay?

Which antibody format do I need?  – F(ab’)2 or whole molecule?

F(ab’)2 Fragment antibodies can minimize Fc Receptor (FcR) binding on certain cell types in flow cytometry experiments. While not generally an issue with T-cells, which don’t have FcRs, other cell types in a sample such as B-cells or macrophages may bind the Fc domain of a whole molecule secondary antibody and could generate background signal.  FcR binding in applications such as IHC or IF is generally not an issue, especially if the tissue sample has been blocked with Normal Serum from the host species in which the secondary antibody has been made. Normal Serum is an inexpensive source of unconjugated IgG which can be used to pre-block any FcR-mediated secondary antibody binding.

Because scFvs contain a light chain component, detection antibodies may recognize scFvs generated from all immunoglobulin isotypes (e.g. IgG or IgM) and subtypes (e.g. Mouse IgG1, 2a, 2b, 2c or 3; Human IgG1, 2, 3 or 4) fairly equally. Light chains are common to all immunoglobulins but signal strength may be reduced.

Because polyclonal antibodies recognize multiple epitopes of an scFv, signal amplification through binding of multiple antibodies is often observed compared to the use of a monoclonal secondary antibody. For increased sensitivity, the use of a biotinylated secondary antibody, followed by streptavidin conjugated to a reporter (fluorophore or enzyme) of choice, may further amplify a signal.

The choice of fluorophore will depend on the detection apparatus being used and the lasers and filters available. Many flow cytometers are able to excite and detect fluors that occupy the UV and Far Red wavelengths. It is worth noting that expression of scFvs may be confirmed by Western blotting using an HRP or Alkaline Phosphatase conjugate.

The best choice for detecting Mouse scFv is an Anti-Mouse IgG, F(ab’)₂ fragment-specific antibody. Anti-Mouse antibodies specific to the F(ab’)2 region of the immunoglobulin recognize many epitopes on the F(ab’)2 fragment of Mouse IgG, including those in the variable region. The host animal is therefore presented with a wide variety of F(ab’)2 fragments, and it generates antibodies against numerous antigenic epitopes, consequently, the polyclonal antiserum recognizes many different epitopes. Because of the broad reactivity, the antibody is expected to react with the single-chain Mouse Fab in the scFv. However, each scFv is unique, and antibodies reactivity will be scFv-dependent. Therefore we suggest that confirmation that recognition of a particular sequence is established empirically.

Your choice of detection reagent depends on the species your sample is from, and if you are using other primary antibodies from other species. In cases where other species are present, you would choose minimal cross-reactive (min-X) antibodies to avoid their detection if possible (See section above).

If your Mouse scFv-Fc Fusion has been made using sequence from a specific IgG subclass, you can use standard Anti-Mouse antibodies as they will detect all four Mouse IgG isotypes, however, you may find improved signal using an Fc-antibody specific for the IgG1.

Question: We designed a CD19 CAR using the Mouse CD19 sequence. We are going to express that CD19 CAR in Human T-cells. What Antibody do we use?

Answer: I would use an Anti-Mouse antibody. You could use a whole IgG or an F(ab’)2 fragment antibody which either recognizes (heavy and light chains), including the Fc domain, or one which only recognizes the F(ab)2 region of the IgG, not the Fc domain.

To detect an scFv generated using Human sequence you will require an Anti-Human antibody.

Question: Hello, do you know if JIR’s Goat Anti-Human IgG, F(ab’)₂ fragment specific antibody ( 109-005-006) binds to Human scFvs? Is the presence of VL and VH enough for binding or does it require the CL (constant light) and CH1 (Constant heavy) sequence to be present for detection?

Answer: Yes! This product should bind scFv and not require the CL or CH sequences to enable its detection of the scFv. Being polyclonal, the Anti-Human antibody can detect multiple epitopes on the scFv for better good detection. However, there may be differences in detection between individual scFvs. Do you require the antibody to be conjugated to anything (e.g. a fluorophore) for detection or did you want this product to be unconjugated? We have a wide range of conjugates available.

Question: I’m detecting Human sequence scFv on Human T-cells, what do I do?

Answer: T-cells don’t have Fc receptors to bind Human IgG and endogenous IgG is generally not an issue so use a Whole molecule anti-human F(ab’)2.