Immunoglobulins form one branch of the adaptive immune system, recognizing pathogens or foreign material and initiating an immune response. Also known as antibodies, immunoglobulins are a group of glycoproteins present in the serum and tissue fluids of all mammals. Some on the surface of B cells act as antigen-specific receptors, others circulate unbound in the blood and lymph. Though there are wide variations in structure between the different classes of immunoglobulins, which differ in size, charge, amino acid composition, and nature of glycosylation. The robust nature of the archetypal immunoglobulin structure remains common to them all and provides the basis for their diversity in detection and effector function. 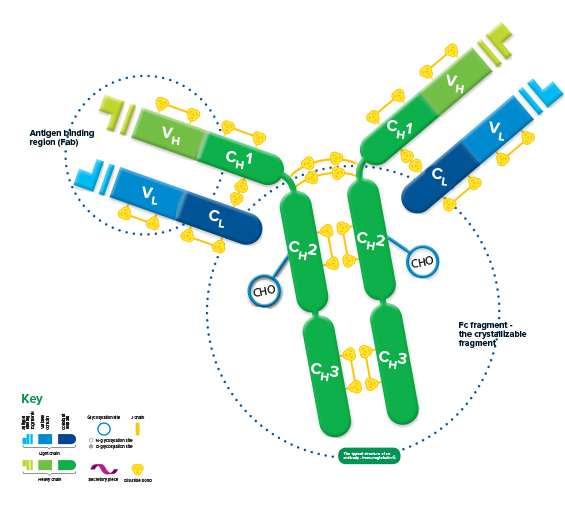 Each immunoglobulin is bifunctional. The Fab region is responsible for antigen binding, and the Fc region for binding cellular receptors, conferring its effector function.

The structure of all* immunoglobulins consists of four chains: two identical light chains and two identical heavy chains make up the recognizable Y shape of the antibody. The chains are held together by inter-chain disulfide bonds and by non-covalent interactions which vary between the different immunoglobulin isotypes. Intra-chain disulfide bonds within each of the polypeptide chains are responsible for the folded nature of the light and heavy chains. These make up the discrete regions called the variable and constant domains.

*with the exception of some species such as camelid, find out more here

Each light chain consists of a variable and a constant domain, VL and CL. The heavy chains have a variable domain (VH) and, depending on the molecule, may have 2 or more constant domains (CH). The exposed ends of the VL and VH domains are called complementarity determining regions (CDRs) and are responsible for the molecule’s ability to recognize antigenic epitopes.

The junction between the 1st and 2nd CH domains is a flexible area called the hinge region, which allows the two antigen-binding sites to operate independently. The constant heavy chains below the hinge make up the Fc fragment responsible for antibody effector function. Carbohydrates are found at conserved locations on the CH domain of most immunoglobulins, where they influence protein folding, secretion, and molecular interactions.

Hinge length and glycosylation, combined with the number of inter-chain disulfide bonds, contribute to structural differences which ultimately create the variety in the biological function of the immunoglobulin classes.

The five immunoglobulin isotypes (classes) found in humans are named according to the heavy chains present in the molecule. An IgG molecule has heavy chains known as gamma (γ) chains, IgM has mu (μ) chains, IgA has alpha (α) chains, IgE has epsilon (ε) chains and IgD has delta (δ) chains.

Immunoglobulin type is also classified by the light chains present. The light chains may be either kappa (κ), or one of 4 lambda (λ) subtypes, and either light chain can be associated with any of the heavy chains. The ratio between κ and λ light chains varies between species, e.g. humans’ ratio of κ to λ light chains is about 60:40, whereas the ratio in mice is 90:10.

Antigen binding takes place at sites on the Fab (Fragment antigen-binding) fragment, located at the end of the variable domains. The most variable region of both heavy and light chains is the Hyper Variable or Complementarity Determining Region (HVR/CDR), which determines which epitope the Ig recognizes. Typically 3 hypervariable regions exist on both the VL and VH domains, containing the polypeptide sequences that interact with the antigen, and provide the vast diversity the immune system needs to recognize a multitude of antigens. Four framework regions (FR) between the CDRs stabilize their position.

Proteolytic digestion of immunoglobulins cleaves the molecule into its component fragments. 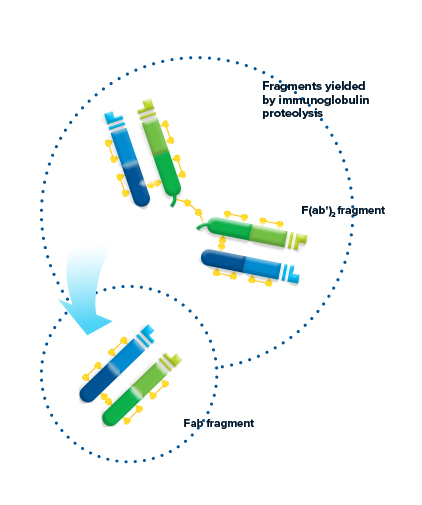 Figure 2: The antibody molecule can be cleaved by proteolysis to yield fragments. F(ab’)2 fragments are generated through pepsin digestion. The divalent fragment retains both antigen-binding sites. Papain digestion of the Ig molecule yields two monovalent Fab fragments and an intact Fragment crystallizable (Fc fragment) cleaved at the hinge.

Pepsin digestion of the Ig molecule results in cleavage of the hinge region after the inter-chain disulfide bond. This results in a divalent fragment that contains both antigen-binding sites called F(ab’)2. The F(ab’)2 fragment can bind antigen and crosslink, but it cannot mediate effector functions due to loss of the Fc fragment. The average molecular weight of a F(ab’)2 fragment is about 110 kDa.

Digestion of the Ig molecule with papain cleaves the molecule at the hinge region before the inter-chain disulfide bond, resulting in cleavage of the Fc fragment from two identical monovalent Fab (fragment antigen-binding) fragments. The Fab fragments contain the antigen binding site (CDR) of the antibody. Each Fab fragment is approximately 50 kDa and made up of the VL, CL, VH and CH1 domains.

Papain digestion of the Ig molecule yields the Fc fragment – Fragment crystallizable. The Fc was the first domain of the Ig structure to be solved by crystallography, but only after proteolysis, highlighting the flexibility of the molecule conferred by the Ig hinge region. The Fc fragment, derived from constant domains of the heavy chains, determines the effector function of the immunoglobulin: binding to specific cell receptors and complement proteins, and mediating different physiological effects (cell lysis, degranulation of mast cells, basophils and eosinophils, and other processes). 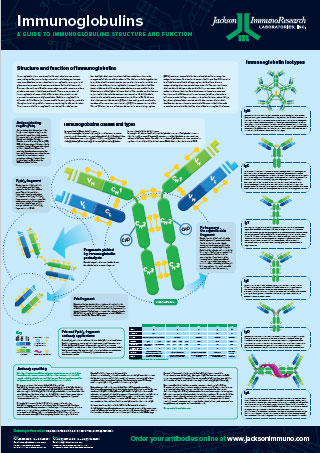