"I have used a wide variety of secondaries and Jackson ImmunoResearch has consistently been the best. The fluorophores are bright and stable and their selective (x reactivity removed) secondaries have always shown species specificity in multiple labeling."

Super-resolution microscopy (SRM) encompasses any optical technique which circumvents the resolution limits of light diffraction found in conventional light microscopy. SRM techniques allow cellular structures to be resolved to the sub-organelle level, enabling information about the 3D structure of cellular components to be determined, and single molecule colocalization to be observed.

Each SRM technique has its own requirements for probe selection. Jackson ImmunoResearch offers a wide selection of labeled secondary antibodies with dyes known to be robust in SRM methods. It should be noted that the field of SRM changes rapidly and guidance for each of the techniques is beyond the scope of this guidance. It is therefore recommended that information from specialized technical literature is sought to aid fluorophore selection.

The following sections briefly outline the principles of some of the most popular SRM techniques.

Diffraction of light by a microscope lens causes light from a single point to appear over a larger area, known as a point spread function or PSF (see Figure 1).

Stimulated emission depletion (STED) microscopy produces super-resolution images by confining the fluorescing region (PSF) of a sample. STED microscopes use two overlapping lasers, the first of which excites the fluorophores as per conventional microscopy (Figure 2A). The second laser, called a depletion laser (STED laser), excites a “donut” of light, with a very small (~30 nm) zero intensity (unexcited) point at its center. This second laser essentially “switches off” the fluorescence generated by the first laser except at the center of the donut, thereby reducing the excited fluorescent molecules to those at the zero point. This effectively reduces the PSF to produce a very small focused region of single molecule fluorescence. Without overlapping interference patterns, high-resolution images can be obtained (Figure 2D). Images with a resolution up to 30 nm in the axial (x-y) plane have been reported.

Figure 1: In optical microscopy, imaging is achieved by light rays from a point source converging to a single point at the image plane. Beyond the limits of light diffraction exact convergence of the rays is prevented, leading to the image of the object blurring. The resolution of a microscope is determined by the size of the point spread function (PSF), or three-dimensional intensity distribution of the object at a point. In STED a donut-shaped depletion laser is applied with the zero point overlapping the maximum of the excitation laser focus. The STED laser causes “saturated depletion” of fluorescence, whereby “fluorescence from regions near the zero point are suppressed, leading to a decreased size of the effective PSF”. Reproduced from Huang et al. (2009). 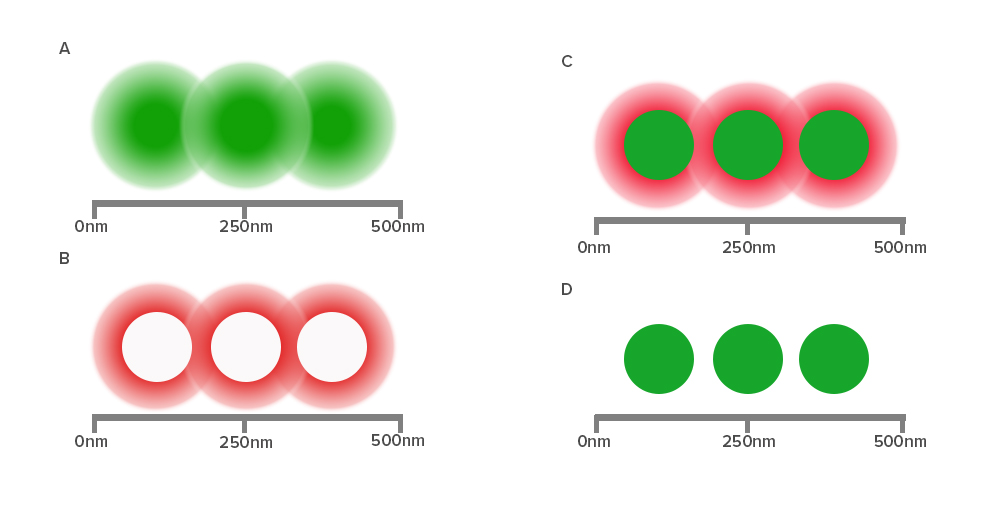 To achieve super-resolution, dyes must have a high emission cross section with the STED laser wavelength and efficiently achieve a high saturation. This intense illumination ensures that all molecules to be “turned off” by the STED laser are dominated by stimulated emission. Suitable dyes should have a low propensity for photo-bleaching, with high quantum yields and contrast, and contain sufficient density of labeling in close proximity to the target.

Jackson ImmunoResearch offers secondary antibodies conjugated to dyes over a broad spectral range that have been successfully employed in STED: Alexa Fluor® 488, FITC and Alexa Fluor® 594.

These techniques can be performed using either a pair of dyes to function as an effector and an activator dye to achieve photoswitching, or using dyes which “self-switch” in the case of direct STORM (dSTORM) (Heilemann et al., 2008). Jackson ImmunoResearch provides secondary antibody conjugates suitable for dSTORM applications. Briefly, a relatively low-intensity excitation laser excites the sample, randomly activating a small number of dye molecules. The individually fluorescing dye molecules are spread apart enough so the center of their point spread function can be calculated, which infers the exact location of the dye. A second laser is then used to switch all the molecules off and the process is repeated. High resolution images are then mathematically generated by overlapping all of the mapped point spread functions of each dye.

The best dyes for single molecule localization are typically very bright and result in enough photons to reliably produce tight Gaussian distributions. Jackson ImmunoResearch offers several proven dyes in a broad spectral range such as Alexa Fluor® 488, Alexa Fluor® 647 and Cy™5 for use in these types of experiments.

Each SRM technique has its own requirements for probe selection. Jackson ImmunoResearch offers a wide selection of labeled secondary antibodies with dyes known to be robust in SRM methods. It should be noted that the field of SRM changes rapidly and guidance for each of the techniques is beyond the scope of this guidance. It is therefore recommended that information from specialized technical literature is sought to aid fluorophore selection.

You appear to be visiting this site from United States .

You may prefer to view this page on our site.

You appear to be visiting this site from the UK.

Orders for delivery to UK addresses should be placed directly with our UK distributor - Stratech Scientific Ltd.